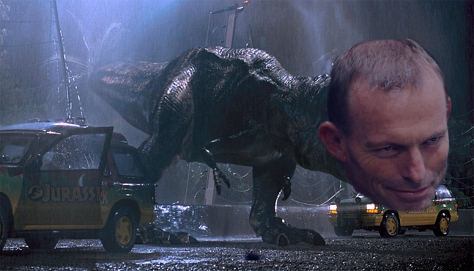 ….Academics have warned of the emerging threat from right-wing extremism at the Conference on Community Cohesion held by University of Western Sydney this past week.

….According to a report  by The Age’s Rachel Olding, attendees framed right-wing extremism as a threat on par with Muslim radicalization in Australia, while a police spokesman admitted racial tension was having a direct impact on policework.

….At the conference, counterterrorism expert Anne Aly from Curtin University argued that violent extremism in Australia was starting to mirror that of the United States. Aly presented a recent New America Foundation study which found twice as many people had been killed by right-wing extremists than jihadists since 9/11.

….But what is driving increasing numbers of Australians to far-right views and organizations? Chairman of the Islamic Friendship Association Keysar Trad noted the influence of right wing pundits, suggesting they “take no responsibility for the hostile environment they have created.”

….In the age of the soundbite and 24 hour news cycle, are incautious comments and Islamic terrorism’s presence as the dominant security narrative actually making us less safe? And do we need to reflect on the role of our political leaders and media outlets in amplifying the perceived magnitude of these threats?

….Speaking to the conference, Deputy Commissioner and police force spokesman on cultural diversity Nick Kaldas said that increased perceived discrimination and racial tensions were having a “direct impact on policing and require us to continue to tailor [our] strategies and workforce.”

….A 2014 Ipsos Mori poll found that Australians wildly overestimated the number of Muslims in Australia. Respondents estimated that an average of 18% of the Australian population were Muslim, a full 16% higher than Australia’s actual Muslim population of 2%.

….Could certain views expressed by public figures and the media have enticed Australian citizens to more radical thinking?  Furthermore, is it appropriate for members of parliament and the media to broach these issues in arguably indelicate ways, given the tensions that already exist?

….In September of last year, ABC Radio listeners heard Attorney General George Brandis’ contention that Daesh “represents or seeks to be an existential threat to us.”

….South Australian Liberal Senator Cory Bernardi recently won a six-month inquiry into food certification after expressing concern about where money for halal certification “ends up.” Some anti-halal campaigners have expressed concern that the money “funds terrorism” while others have ironically boycotted iconic Australian products like Vegemite in response to its halal certification.

….Even our Prime Minister Tony Abbott has made controversial remarks, stating most notably last year that he found the burqa “a fairly confronting form of attire” and “wish[es] it weren’t worn”.

….It seems possible for a person to contrive, from these and other statements, an extremely negative view of Islam and Muslim people. One that does not contextualize the insignificant number of extreme voices against the whole, the complexity and achievements of the Islamic world, nor the myriad positive contributions of Islamic Australians.

….At the Conference on Community Cohesion, Mr Kaldas labelled far-right extremism and protests which “encourage divisive notions of us and them” as some of the largest challenges facing Australian police. The Deputy Commissioner’s comments follow on the heels of Nationals MP George Christensen who, at time of writing, plans to attend a Reclaim Australia rally in his electorate this coming weekend citing his support for people defending the Australian way of life, culture, and freedom from radical Islam.

….For anyone whose political views stop short of “send them back where they came from,” social cohesion and a respectful multicultural society seem necessary for a prosperous Australia. Not just in these fraught young years of nationhood, but into the future as our country continues to grow.

….It’s imperative that our leaders and media outlets be mindful of their influence, and feel accountable for the extreme worldviews they might inadvertently promote. Australia, we need to talk about extremism, but our own extremist tendencies, and the way we shape debate, shouldn’t escape criticism.

A meandering meditation on counterculture, geekdom and politics