This article will contain significant spoilers for Star Wars: The Last Jedi, so if you haven’t seen the movie yet, or don’t want surprises to be ruined, stop reading now – you have been warned! 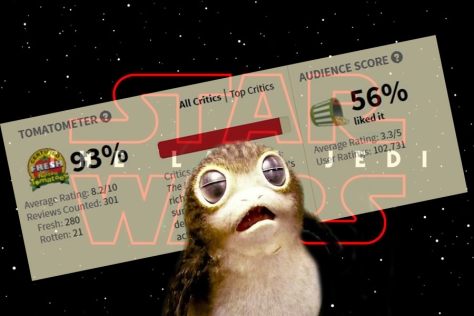 Let me just get this out of the way first. I believe that taste is mostly subjective. I do think there is a layer of objectivity in which many people can find a degree of agreement, but on the whole, whether you like or dislike something is largely a product of the unique conditions that have created you. And so, if you really enjoyed Star Wars: The Last Jedi, I’m really glad for you! Honestly; I wanted to be like you and to just have fun. I thought to myself beforehand ‘just relax, treat it like an amusement park ride, go with the flow’. But I couldn’t. I really disliked The Last Jedi in quite a few ways, and each time I tried to push what had just happened out of my mind another zany creative decision would make me think WTF? Anyway, without further ado, here are a bunch of things that shat me to tears with The Last Jedi.

Holy shit, you could tell the marketing executives were frothing with excitement about this one. In one of the advertisements it shows General Leia sitting on the bridge as Ben Solo fires a deadly salvo inside the ship. Holy smokes! As the moment neared in the cinema I was a little bit sad that Fisher would be out of the film so quickly, but it was a good place to end it, I thought. As she was blasted into space I thought oh wow, that’s graphic, but I’ll bear with it for now. Then again as crystals of ice started to form on her corpse I thought, oh, this is really uncomfortable now. Then all the oxygen left the theatre as the camera lingered sill longer on Leia’s finger. They wouldn’t, we all thought. Oh yeah, they would. The late Carrie Fisher, shooting through space like a demented corpse rocket. One of the most uncomfortable and cringeworthy things I’ve ever seen on screen. Later in the film when looking for someone to stay behind to enable the Resistance’s escape, I thought for sure that General Leia would offer to switch places with Laura Dern’s excellent Admiral Holdo, and reinforce one of the film’s aims of passing the torch. It wasn’t to be, however, and despite Holdo firmly securing her place as one of the most badass characters in the Star Wars universe, I can’t help but think losing her is a big shame. Especially because Dern stood out among the cast as an actor capable of replacing Fisher as the Resistance’s leader. It seems now that Leia’s death will simply be wedged into the title crawl for the next movie. Title crawls that seem to be encompassing more and more important story beats in this new trilogy (like the First Order taking over the entire galaxy). Oh and they brought her motherfucking dog to the film with the press noting that “his ears perked up every time she was on screen”. No shit, because he thought his owner was still alive.

In any case, we’d better hope that Leia is simply written out in the opening crawl, because the alternative is they do some awful CG uncanny valley shit.

In Empire Strikes Back we learn so much about Luke and the universe he inhabits. Many of the questions we had at the end of A New Hope are answered in satisfying and clever ways. Going into The Last Jedi I had equally high hopes! What will Luke have discovered at the Jedi temple? Why did he leave a map for people to find him? Why did he leave R2 in stasis to help people to find him? Who is Snoke? Who are the Knights of Ren? Who are Rey’s parents? Wow, so many exciting plot threads to explore in The Last Jedi, except none of them come to fruition at all. The first scene with Luke in The Last Jedi pretty much encapsulates the film’s attitude towards the audience. All that hope you had for what was going to happen? Tossed over your shoulder. No, this wouldn’t be some kind of echo of the original trilogy. No, we wouldn’t get to see Luke training Rey just like Yoda trained Luke. No, what we apparently needed was a radical deconstruction of what we’d expected to happen. Oh great. Just like Han Solo in The Force Awakens, Luke is just a bum and a jackass now. The very posterboy for hope, understanding, courage, and friendship for generations of film goers reduced to a nihilistic mess. Holy fucking shit. And all that nihilism would have been fine if it had gone somewhere. For a while I thought the theme of the film was going to be the nature of the force itself. Since the force seeks to achieve balance, if you create a Jedi order, the force will manifest an equal power for the dark side. When Luke was describing the ‘dark side’ of the island, the equal balance and opposite to the beauty of the island’s surface I thought, holy crap, this is really deep. But In the end, it was just another dropped plot thread.

Holy fuck, is that my dog’s gravestone? Oh my god, my dog is dead.

Oh man, I was really worried that my dog had died.

“Oh no, your dog is totally dead also.”

This is how it felt to watch the end of The Last Jedi, what a mindfuck, and just… super redundant. If Luke is going to die anyway, why not have him die at Ben Solo’s hands like Obi Wan died to Vader? If there needs to be a new force power to explain how Luke could project himself through space to get there, why couldn’t the new force power just be enough to stop the blasts from the New Order forces? I walked out of the cinema with my face in my hands, and another person who’d just seen the film asked me how I’d found it.

“Well, because the Xwing was underwater,” he replied.

I stumbled off in a daze. And yes, of course the Xwing was underwater, but that’s just the thing. It’s literally the only ship in the entire series that can demonstrably operate after a long period of being submerged in water. It could have been a big heroic moment for Luke. It could have added the final emotional punch to that scene, and acted as a much-needed anchor to the feelgood vibes of the original trilogy. It could have been, as the film clumsily tried to elicit, the spark of hope in an otherwise hopeless situation.

*Holy shit that first scene where Poe is pranking General Hux on the bridge was awkward as fuck. I know he was stalling for time, but it was just awkward and infantile. The movie rolled out the humor waaaaay too damn much, and awkwardly, often in unfortunate moments. The tension between Luke and Rey on the island was always defused by little gags, and the gags themselves didn’t serve to further the characterization like they did in The Force Awakens.

*Oh shit, and Admiral Ackbar is dead now too, if you missed that one throwaway line about him perishing on the bridge with Leia. All it would have taken to fix this problem would be to have someone address him as Admiral Ackbar on the bridge. I also can’t remember what his one line was, but I’m pretty sure it was just a different way of saying “It’s a trap” which, would have been awesome, if we’d known it was him. RIP.

*The entire casino plotline was dull as fuck and didn’t change a fucking thing in the end. You’ve literally got an intergalactic casino and that was the most interesting stuff you could come up with? Couldn’t there have been bizarre alien gambling? Giant holograms? Bright lights and crazy colours? Nope. Just like a Monte Carlo casino… except some alien people and cat horses.

*Why do bombs drop in space? I mean I get that it’s Star Wars, and I get that it’s kind of modelled on World War 2 and that’s the type of bombs they had then. But really? They fall out down into space? Come on… If they’re propelled by the ship interior’s artificial gravity out through a shield and into zero G, then okay. But why then do ships need fuel to travel through space? Unless something stops them, they should keep going perpetually.

*The criminal under use of Captain Phasma… again!

Look, that about wraps it up from me. That’s not because there’s nothing more to say about this film (there is) but it hurts me too badly to keep on thinking about it. I’ll probably see the next film, though I doubt I’ll rush to see it at the cinema. And I’m really worried at this point that the conclusion of this trilogy won’t be an end in itself, but the resolution of Ben and Rey’s story and a launchpad for the NEXT Disney Star Wars trilogy (search your feelings, you know it to be true).

What’s great however, is that so many people really seemed to love this film; as far as I can tell I fit into a smaller subset of people who didn’t enjoy it. And you know what? That’s fine. I’m glad that this film brought happiness and enjoyment into the world for so many people. That’s a great outcome. I’m just sad that for me, The Last Jedi failed to capture the promise of The Force Awakens, nor adequately do justice to Luke Skywalker. When I was growing up in a country town it was hard being a quiet, skinny kid, but Star Wars made it a bit easier. In Luke I had a mythic figure to look up to. Someone who was brave, even if he was scared. Someone who stood up to unfairness and evil. Someone who protected his friends and loved unconditionally. He was a great role model. It’s a pity that The Last Jedi opted to deconstruct that myth in an attempt to cut its teeth as art.

One thought on “The Last Jedi Rant”

A meandering meditation on counterculture, geekdom and politics